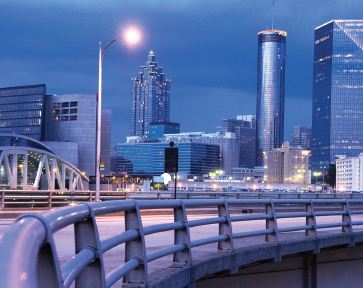 Movies filmed in Georgia have grossed more than $415 million at the box office so far this year, cementing the state’s position as a leading location for filming.

Both “The Blind Side” and “The Crazies” recently in theaters have grossed a combined total of more than $325 million at the box office, note state officials. “Why Did I Get Married Too?” was released on April 2 and, according to recent figures, grossed more than $48.5 million, including at least one fourth-place finish in mid-April.

At least three high-profile productions filmed in Georgia were slated to hit movie theaters recently or in the next few months, including “The Joneses,” starring Demi Moore and David Duchovny, in April.

“I signed the 2008 Entertainment Industry Investment Act to support our efforts to recruit film, music and digital entertainment projects to Georgia,” said Governor Sonny Perdue. “These industries are thriving, growing and employing thousands of Georgians. Georgia’s diverse landscape, from the coasts of Savannah to the mountains of North Georgia, makes our state a prime location for film production.”

Entertainment productions in Georgia have increased 400 percent since the state introduced an aggressive tax credit package in 2008.

More than 100 feature films, television series, specials and pilots have been produced in Georgia since then, helping catapult the state into the top five in the nation for film and TV production in 2009, and landing it in the top spot in the Southeast.

“Our ability to provide a variety of astounding locations, a highly-skilled workforce, significant infrastructure and cutting-edge tax incentives makes Georgia an extremely desirable place to film,” said Bill Thompson, deputy commissioner of the Film, Music Digital Entertainment Division of the Georgia Department of Economic Development. “Georgia offers everything production companies are looking for, which has enabled us to attract projects ranging from TV series like ‘Vampire Diaries’ and ‘Drop Dead Diva’ to feature films such as ‘The Blind Side,’ ‘Zombieland’ (with scenes filmed in Newnan) and ‘The Joneses.’ We’re excited about the opening of ‘The Last Song’ and look forward to a successful run of all of these Georgia-made movies.”

The Georgia Entertainment Industry Investment Act provides an income tax credit of 20 percent to qualified productions, and an additional 10 percent tax credit to productions that embed a Georgia promotional logo in the titles or credits, or as product placement within the content of the production. The tax credits may be awarded to not only traditional feature films, television series, commercials and music videos, but also to innovative new industries such as video game development and animation. Since Georgia increased its competitiveness in mid-2008, the program has generated more than $950 million dollars in direct investment, yielding an overall economic impact of over $1.6 billion to the state.

Filmed on Tybee Island and at the Georgia Aquarium, “The Last Song” is a coming-of-age drama film written by Nicholas Sparks and starring Miley Cyrus, Greg Kinnear, Kelly Preston and Liam Hemsworth.

Written and directed by Tyler Perry, “Why Did I Get Married Too?” is a comedy-drama film about four close couples gathering in the Bahamas for an annual one-week reunion. Tyler Perry Studios is located in Atlanta. Perry has filmed all his movies in Georgia, as well as his TV shows “Meet the Browns” and “House of Payne.”

Scheduled for release this summer are “Killers” and “Get Low.” “Killers,” starring Ashton Kutcher, Katherine Heigl and Tom Selleck, was filmed in Atlanta, Douglasville, Buford and at RiverWood Studios in Senoia. Heigl’s character, Jennifer Kornfeldt, falls in love and rushes into marriage with Spencer Aimes, played by Kutcher. The two enjoy a picture-perfect marriage until they find out they are targets of a multi-million dollar hit job in the action/comedy film.

“Get Low” is an American folktale and real-life legend about the mysterious, 1930s Tennessee hermit who famously threw his own funeral party. The cast includes Robert Duval, Bill Murray, Sissy Spacek, Lucas Black and Bill Cobb. The film was shot in locations in Georgia that have changed little over the generations, including Newnan, the small town of Crawfordville, the Gaither Plantation in Covington, a beautiful old church near Sparta, and Pickett’s Mill Battlefield near Dallas.

Coming to the big screen in November is “Due Date,” a comedy film starring Robert Downey Jr., Zach Galifianakis, Michelle Monaghan and Jamie Foxx. Downey plays a highly-strung father who finds himself on a cross-country road trip with an aspiring actor. The film was shot at Hartsfield-Jackson Atlanta International Airport, and in Atlanta, Hampton and Gainesville.

More than 700 film and television productions have been shot in Georgia since 1972, including such projects as “Driving Miss Daisy,” with scenes shot near Senoia and Turin; “Fried Green Tomatoes,” filmed in Newnan, Senoia and RiverWood Studios; “Sweet Home Alabama,” which was partially filmed in Coweta; “My Cousin Vinny”; “Forrest Gump”; “Fireproof”; “We Are Marshall”; “Midnight in the Garden of Good and Evil”; “Diary of a Mad Black Woman”; the Emmy Award-winning HBO film “Warm Springs”; Turner mini-series “Andersonville,” filmed on an outdoor set built near Turin; several Hallmark Hall of Fame projects; and TV productions of “In the Heat of the Night” and “The Dukes of Hazzard.”